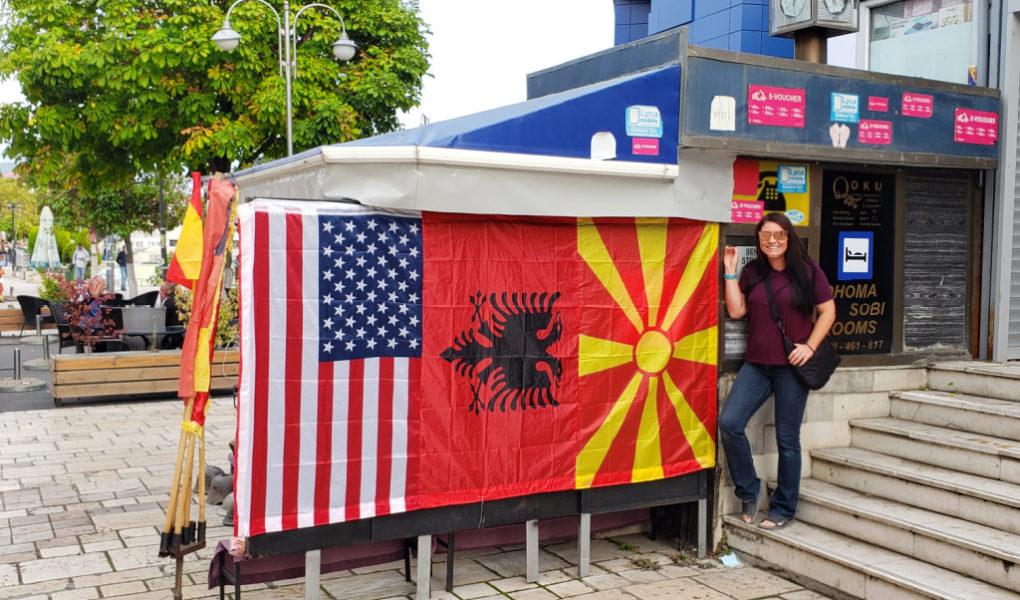 About a year ago, in September 2020, we landed in Albania, ready to explore the Balkans—a region that stubbornly and miraculously remained open for travel. In fact, we used to proudly boast that even in the height of all the Covid madness, Albania, Kosovo, and Macedonia never closed their borders to Americans. These were destinations that we were happy to explore and support, given that we were welcomed in as international travelers with no questions asked.

Somewhat naively, our plan was to float around these three countries, patiently waiting for the world to come to its senses and reopen. It had to come soon, right? However, even if a European reopening was slow-going, we would make it work with the few destinations accessible to us that were open and mandate-free.

Initially, we rented a comfortable apartment with a fantastic balcony and appreciated living on some of Albania’s most beautiful coastline. However, after nine months of using Sarandë as a home base, we were ready for a change of scenery.

Spring of 2021 brought some promise of tourism on the horizon. For example, there was media chatter that countries like Turkey and Malta would open without any testing or restrictions (which later, never came to fruition). Additionally, “vaccines” were becoming available for those who desired them.

During this time, we closely watched where people were traveling, especially nomads and other travel bloggers. Every day, we would look at travel alerts and read the Covid-19 travel advisories from US embassies worldwide. We practically became experts on the world’s border restrictions and entry requirements.

Interestingly enough, Greece, Croatia, and Albania were very popular 2021 destinations. This was probably because these countries went against the recommended EU travel regulations and welcomed most travelers in for the summer.

Curiously, documented cases/deaths never created any outlier events in these countries despite becoming hubs for international travelers. Additionally, foreigners could enter into these countries with just a PCR test, and many happily complied for a chance to indulge in a European vacation.

While the rest of the EU remained closed, Iceland opened for vaccinated travelers in March of 2020. Tourism in Mexico, Costa Rica, and Albania also saw a boost because the countries were open and free, offering a beach vacation and warm weather.

In our daily research, Balkan media outlets began reporting that Montenegro would allow people coming from neighboring countries to enter without any testing or quarantine for the summer tourism season. We quickly decided to take advantage of this window of opportunity and entered Montenegro from Albania on June 16. Looking back, thank goodness we acted fast.

By July 31, the media began reporting that Covid cases were now skyrocketing in the country. Curious timing considering that the month before, the government was pushing “vaccinations” on its citizens. Perhaps the vaccinated began shedding their spike proteins onto the unvaccinated? While in Montenegro, we actually got mildly sick with a runny nose and the sniffles for a few days.

As a result of the rising cases, the Montenegrin health authorities began mandating PCR testing or vaccination simply to enter a bar or restaurant. Thankfully, on July 28 we had already crossed the border into Macedonia.

Our intention was to always outrun the madness in the world and wait for people to come to their senses. Also, we hoped to avoid any testing requirements. Why?

In research easily found online, PCR swabs are coated with ethylene oxide, a highly toxic nanoparticle that is absorbed into the body. Toxic swabs are not something we want to be jammed up into our nasopharyngeal cavity for no logical reason.

In addition to being really expensive, the CDC now reports that PCR tests are faulty. Taking a PCR test is not a mindless hoop we are willing to jump through because frankly, we do not trust these tests.

Longest 90 Days of Our Lives

In order to renew our one-year visa for Albania, we needed to stay 90 days outside the country. These were some of our longest and most anxiety-provoking days of travel—ever!

All day, every day, we were consumed with checking American, Albanian, Kosovan, and Macedonian news—checking for updates on any new border restrictions or testing mandates. It was getting overwhelming to stay on top of the rules for four different countries.

Behind the scenes, it was hard to live in the moment. There was a feeling of wanting to quickly get through the days, cross borders, just so we didn’t have to worry about mandates anymore. Our biggest fear was getting caught within borders, with mandates that we didn’t want to abide by.

The Moment We Knew

On August 12, Kosovo suddenly announced that it was implementing border restrictions and Covid passports, along with strict fines for not wearing a mask. Soon after, Macedonia issued similar mandates while Albania started its first-ever Covid border controls.

That friends, was the exact moment when we knew that the carefree travel in the Balkans was officially over.

Mandates often come quickly. We’ve all seen governmental agencies decide on new tyrannical measures and quickly implement them, even the next day.

Of all the countries open to us, Macedonia was where we wanted to be. It is where we are the happiest and feel “among our people.”  Unfortunately, Macedonia also implemented “vaccine” passports while we were there, and is super mask-compliant. Macedonian media also reported more mandatory “vaccine” measures to come in mid-October.

People who are out in the world right now—jumping from country to country or from state to state—are experiencing the very shocking reality of how different life can be across borders (or states and cities).

We decided to cross over back into Albania before being caught in a mandate that we would refuse to comply with. Simply driving over the border from Macedonia into Albania was a reminder of why we went there in the first place—no “vaccine” passports or masked faces.

On a side note, these two countries represented the ideal testing ground to prove that masks don’t work―while Macedonia was heavily masked, virtually no one in Albania wore one. Therefore, if masks worked, Albania would have had far more cases and deaths. The data chart below proves that they did not.

Remember, Albania currently has an indoor mandate in place but it appears that collectively the Albanian people refuse to comply. Honestly, it was an immediate relief not to worry about masking our faces or if a restaurant was going to ask for proof of a “vaccine” to eat a meal or drink a cup of coffee outdoors. It’s time to come to terms with the chilling reality that international travel for the unvaccinated is becoming nearly impossible. Additionally, PCR testing, quarantines, and “vaccine” passports take much of the fun out of travel, making it overly complicated and downright sickening.

For example, have you seen the article that Amsterdam now requires a PCR test to enter a business to pay at the register or use a toilet? We cannot, in good faith, be participants in this insanity any longer.

For us, the biggest driver of our plan of action is the airline mandates. Starting November 8, the Biden Administration announced new airline protocols that have us extremely concerned. The official mandates include:

With Covid camps no longer a conspiracy theory, do we really want to be a part of contact tracing?

Time to Wake Up

We have spent years living in Eastern Block countries; walking through death camps, standing in both torture and execution chambers, and witnessing the evil that exists in the world. It would not surprise us if “quarantine camps” were actually used to isolate intellectuals, political opposition, or anyone who simply disagrees with today’s narrative.

For example, imagine a scenario where a political opponent tests positive, maybe even fraudulently. That person would then be taken from their home and placed in a quarantine camp. Later, the family would be notified that their loved one died of COVID and was cremated to keep the community safe. Is it really that far-fetched?

Where to Go From Here?

With a one-year visa for Americans, technically we could stay in Albania another year and see where the world goes from here. However, we did that last year and travel has only gotten more restrictive.

Additionally, the “powers that be” are really pushing for mandatory vaccination in order to fly. We won’t take the risk of getting stuck internationally with no way of getting back to the US.

Sadly, we aren’t quitting travel—at this time the global tyranny is forcing us to end the international part of our journey.

It is important to note that while the Balkans flew under the radar in 2020, the region now seems to be a new target for tyranny. Once quite open and free, Kosovo and Macedonia now require vaccination to enter malls, bars, and restaurants. Subsequently, nothing good will come of Edi Rama’s recent meeting with George Soros in NYC. Albania plunging into a “vaccine” passport state is now just a matter of time.

Even if airline mandates weren’t our primary concern, collectively we have lived in Albania for 10 months. Although it served us well at the time, we’re not sure we’d want to live a similar year all over again.

However, as of now, we are out of international travel opportunities to take advantage of without worry or restrictions. Together, we have come to the realization that all roads for The Budget Savvy Travelers now lead back to the US, as we will not be taking experimental gene therapy treatment for a disease in which we already have natural immunity.

From the beginning of our nomadic lifestyle, the phrase “live free or die trying” was our motto. It appears that to live in what’s left of freedom, it will be in the US.

By the time you read this, we will have already landed in Chicago preparing to find a community of other Americans who understand the importance of living by and fiercely protecting our God-given rights and freedoms. The US is our country and we will take all of the necessary steps to defend it against evil communist globalists, because if America falls the world falls.

Try, try, try as they might, eventually, they will fail because God and goodness will prevail.

Pray for America. Pray for the world.

Countries Visited in 2021: Albania, Montenegro, Kosovo, Macedonia, and the US.