Home » 15 Things to Do in St Petersburg Russia | These Are Truly Impressive! There are so many impressive things to do in St Petersburg, Russia that it may feel overwhelming to try and narrow down the list. Commonly referred to as the “Venice of the North,” St Petersburg is full of bridges, canals, narrow passageways, and magnificent plazas. The best way to get around is either on foot or by boat. However, long distances can easily be traversed by using one of the deepest metro systems in the world.

15 Things to Do in St Petersburg Russia

St Petersburg’s center features wonderful Neo-Classical and Baroque buildings that have been exceptionally preserved, and its churches and cathedrals are truly impressive. Some of the best things to do in St Petersburg include visiting Peter the Great’s brilliant summer palace at Peterhof—located just outside the city limits.

However, it can be reached with a scenic and short boat ride. Also, just outside the city limits are the palatial Romanov palaces of Pavlovsk and Tsarskoe Selo—both a short train ride away.

To satisfy anyone’s taste buds, a wide array of restaurants are scattered throughout the city. However, we’ll share our personal favorites too. Also, there are performances and exhibitions constantly occurring throughout the year. Though, the few weeks of the White Nights are typically the best. This is the time of year when the sun hardly sets and the entire city seems to party, never sleeping.

This extravagant former dwelling of the tsars contains one of the world’s most significant art collections including pieces by Rembrandt, Picasso, Michelangelo, and Leonardo da Vinci. The Hermitage also contains the Winter Palace, the residence of the tsars before the 1917 revolution.

With its grandiose gardens and palace, Peterhof radiates extravagance. Located about 19 miles from the city, on the Gulf of Finland, it is the perfect day trip to see and feel what 18th-century tsarist life was all about. Lastly, hydrofoil boats run from June through October and take about 45 minutes.

The bell tower with spire inside the Peter and Paul Fortress can be seen from all over the city.  The original intention of the fort was to defend the city from Swedish attackers. The location is associated with the founding of the city.

The Cathedral of SS Peter and Paul houses the remains of tsars from the Romanov dynasty. Other highlights inside the fort include St Peter’s Gate, Neva Gate, Trubetskoy Bastion, and one of the few beaches within the city limits. Don’t be surprised if you see locals taking a dip while chunks of ice float by.

Considered to be the cultural heart of St Petersburg, it’s home to several interesting sights including the Cathedral of Our Lady of Kazan. Also, Nevsky Prospekt is lined with picturesque and historic churches and buildings. Also, it’s a hub for entertainment, nightlife, and shopping.

Other highlights along the way include:

The museum is located in the Mikhaylovsky Palace which was designed by the Italian architect Carlo Rossi. The focus here is all on Russian artists. Highlights of the museum include the works of Bryullov and Repin. Finally, audio guides are available and a nice Russian pancake (blini) restaurant is on the ground floor.

It took about 40 years to complete the largest church in Russia. Miraculously, the interior ceiling paintings survived heavy shelling throughout World War II. Also, the interior is decorated with over 400 kilograms of gold.

Located about 15 miles outside the city, the Tsarskoye Selo is a wonderful example of tsarist architectural magnificence. Particularly, the opulent palace and gorgeous parks, as they were the former residence of the imperial family and visiting nobility. Finally, Tsarsko Selo lies in the town of Pushkin.

Pavlovsk was presented to Paul I by his mother Catherine the Great in 1777. Today, the grounds are a romantic collection of ruins (stone bridges, pavilions, and temples) that surround a delightful palace. Also, make sure to plan extra time to tour the romantic gardens.

Opened in 1860, it is St Petersburg’s preeminent music theatre. Masterpieces by Mussorgsky, Tchaikovsky, and Rimsky-Korsakov received their premieres in this building. As a result, world-class opera and ballet may be seen here just about any time of the year.

Probably St Petersburg’s most famous landmark, the Church on Spilled Blood is something you can only appreciate in person. It was built in 1881, as a memorial to Alexander II on the exact site of his assassination. In particular, pay special attention to the interior. It is covered in images of the tsar’s patron saint, Saint Alexander.

The contorted, vibrant domes make it one of the best places in the city for a photo! For this purpose, our favorite spot is along the Griboyedov Canal with the church in the background.

The Griboyedov Canal stretches about three miles across the center of the city. If you’re able to reach any destination by strolling along this canal, it will make the journey that much better. Pay special attention to the 21 bridges along the way, especially the famous Lion Bridge. Also, the canal will take you to the Church on Spilled Blood.

The House of Soviets was built in Stalinist style during the late 1930s. The building was a command post and military stronghold during World War II. Beside the building, is a huge statue of Vladimir Lenin.

Interestingly enough, it was originally conceived that this would be the center of Soviet Russia in St Petersburg. Furthermore, the seven-story building is flanked by five-story U-shaped wings—pay special attention to the muscular Soviet pioneers and workers displayed on the frieze.

Unveiled in 1926, this is one of the most significant statues of Vladimir Lenin in all of Russia. It’s positioned in front of the Finland Railway Station. Precisely where Lenin gave his first speech after returning from exile—this was the exact moment when he publicly/personally got involved in the Russian Revolution.

Directly behind the statue is the Finland Railway Station. Inside, you’ll find locomotive #293—this is the exact train that Lenin rode on when returning from exile. It’s located in a glass case on platform five.

The best place to taste pyshki (Soviet-style donuts) is at Pyshechnaya (cafes that serve pyshki) on 25 Bolshaya Konyushennaya. To begin with, this popular donut shop is adored by locals and tourists alike.  It’s the only one left that has an authentic Soviet-era feel.

Also, they serve up traditional ring donuts dusted with powdered sugar, coffee, and tea. As a result, this was one of the most interesting experiences we had in Russia—see the short video below. 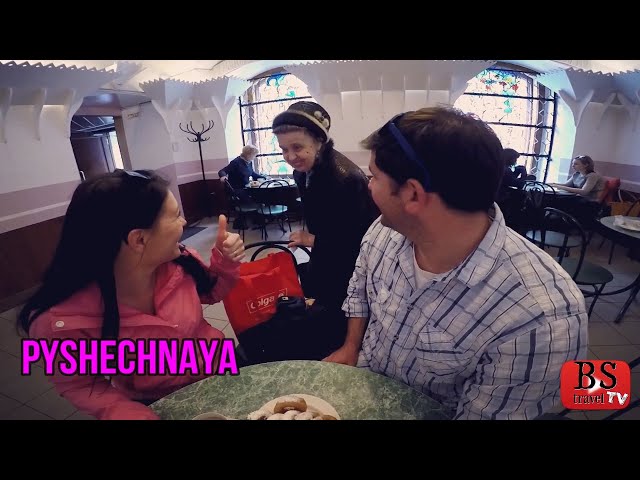 With over 50 kiosks and 50 restaurants scattered throughout the city, Teremok has officially conquered St. Petersburg. In short, they serve generously portioned, tasty crepes (blinis) to order.

Also on the menu is pelmeni meat dumplings, borscht soup, and kvass (made from fermented bread). Additionally, service is fast and the prices are exceptionally budget-savvy. It’s a great and affordable way to get a taste of Russian cuisine.

St Petersburg is a wonderful city to tour on foot. Therefore, you shouldn’t be very panicky about getting lost. The city is extremely safe and the people are friendly. In fact, most metro stops are usually a short walk away.

Additionally, riding the metro is in itself one of the best things to do in St Petersburg. For example, Avtovo Station has been celebrated as a palace for “the people.” As a result, the station is decorated with marble columns and chandeliers.

Where to Stay in St Petersburg

In terms of figuring out where to stay, make sure you book something relatively close to a metro stop—it will make getting around the city that much easier. Our favorite location is accommodations near Admiralteyskaya Metro Station, in the heart of the city. However, prices will decrease the farther you locate yourself away from the city center, just stay near a metro stop.

Here are a few recommended lodging options, all within the best location of St Petersburg:

Have you visited St Petersburg Russia? What were some of the highlights of your trip? Please share your experience or questions in the comments section below.