Home » 5 Best Things to Do in Riga Latvia – You Won’t Believe This! Riga, Latvia was our first stop on our tour of the Baltics. There’s no doubt about it, Riga is a picturesque city. From the shoreline of the Baltic Sea, Riga’s steeples rise above the colorful, medieval buildings. At the time of our visit, a production crew was even filming out on the cobblestone streets.

Despite its apparent movie set appeal, Riga ended up falling a little flat for us. Touring during March, pretty much the worst time of year, put a damper on our visit. However, we could see it being quite brilliant during the warmer months and Christmas.

Locals seemed a little moody. Other than fast-food chains, the majority of restaurants were fairly expensive on our backpacking budget, so we ate mostly at our rental apartment. Regardless, we still did some amazing things!

Our apartment was across the street from the Naughty Squirrel Backpackers Hostel, the most popular hostel in the Old Town. Unfortunately, the hostel opens the windows and blasts music, especially on weekends, until 2 to 3 a.m.

Also, there were often people outside in the evenings loitering, smoking, and talking, making it hard to go to bed early. Check out other accommodation options for reasonable prices.

We arrived in late March when it was still quite cold and the town felt sleepy. Looking back, this may have contributed to our disconnection with Riga.

Even the tourist guide strongly suggests avoiding traveling here during February and March. As a result, we could envision the city being much more fun during the warmer months. Moreover, the best time to visit Riga is either in early summer or early fall when the crowds have died down but the weather is still pleasant.

As we began to explore deeper, Riga slowly showed off its charms. Interestingly enough, although Riga was a little boring from a tourist’s perspective (during March), it seemed like a great place for digital nomads to lay low for a while. Also, the city is large enough not to feel smothered, it never felt crowded.

There are nice parks and outside spaces and it’s well connected by public transport. Furthermore, grocery stores offer a lot of variety at prices that are generally easy on the wallet.

5 Best Things to Do in Riga Latvia

Below are the five best things to do in Riga, Latvia:

Although Latvia was once under Soviet occupation, little remains from that time in history. Much of the statues and memorials were removed as Latvians rightfully viewed them as a symbol of oppression. Those interested in this part of history can get a peek behind the Iron Curtain and view the few remaining sites that still stand today.

The Corner House was probably our favorite attraction in Riga. Much of the Baltic countries were significantly impacted by the KGB, and with it came a dark and tragic history.

This is where the KGB imprisoned, tortured, and killed Latvian victims. The guided tour was worth the cost and took visitors into the cells, torture rooms, and murder chambers that are still covered in blood and bullets.

Unfortunately, due to development projects and funding issues, the future of the Corner House is currently unknown. Our tour guide shared that the museum will shut its doors in September 2018 with the possibility of it remaining closed forever. The admission price was €5 per person. 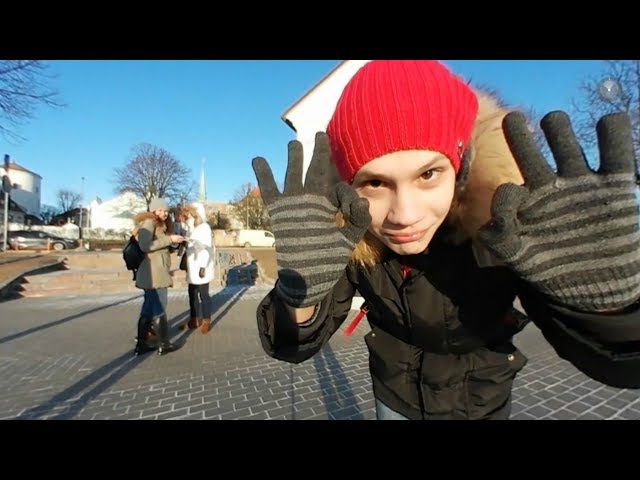 Constructed between 1953 and 1956, the Academy of Sciences is an imposing Stalinist-style structure that was the first skyscraper of the USSR. Physical evidence of the Soviet occupation can be hard to find in Riga, so this place is well worth a visit.

For just under €4, you can head up to the 17th-floor balcony for breathtaking views of the city’s skyline.

The granite Latvian Rifleman Monument was built to honor the riflemen who protected Lenin after the 1917 revolution. There is also a monument dedicated to the Soviet “Liberation” of Riga located on the other side of the Daugava River. Hammers and sickles can also be seen on the wrought iron fence along the river near the Radisson Blu Daugava Hotel.

Any museum with free admission where tourists can warm up in winter or cool down in summer is a hidden gem in our book. The older exhibits need an English translation guide that is available in each room.

However, the standout experience at the Latvian Museum of War is the exhibit on the Latvian involvement in WWI and WWII that is also in English. Backpacks and coats must be stored away in free lockers on-site.

Bastejkalna Park was probably our favorite place to hang out in the city. Grab some lunch, enjoy a picnic, and stroll next to the river.

The Cat House is named for the black cat that adorns the tower on top of this iconic house in Riga. Local legend has it that the black cat caused bad luck to its sculptor when he fatally fell while attempting to put them up.

Then around 100 years ago, the owner of the house caused an uproar when he ordered the cat’s bum to face his enemies to retaliate when he was excluded from being admitted to the local Guild.

Those that love Christmas will appreciate this unique marker which supposedly makes the first public Christmas tree display.

Interestingly enough, Estonia also stakes its claim as hosting the first public Christmas Tree in the very same year of 1510.

For centuries, Big Christopher has been a symbol of the city. Legend says one day after carrying the Christ child across the deep river, the humble giant discovered a pile of goods that were used to build Riga. From then on, he was known as Riga’s protector from floods and natural disasters.

Around the 16th century, local people would pay tribute to him with flowers and candles asking for safe passage on long journeys. Today a replica stands along the bank of the Daugava River in a large glass box with the original in Riga’s Museum of History and Navigation.

The Three Brothers are the oldest medieval dwelling houses in Riga. Legend is that they had been built by three men of one family, during different periods showcasing how architectural trends evolved from 1490 to the second half of the 17th century. Admission to the Latvian Museum of Architecture, located inside, is free of charge. 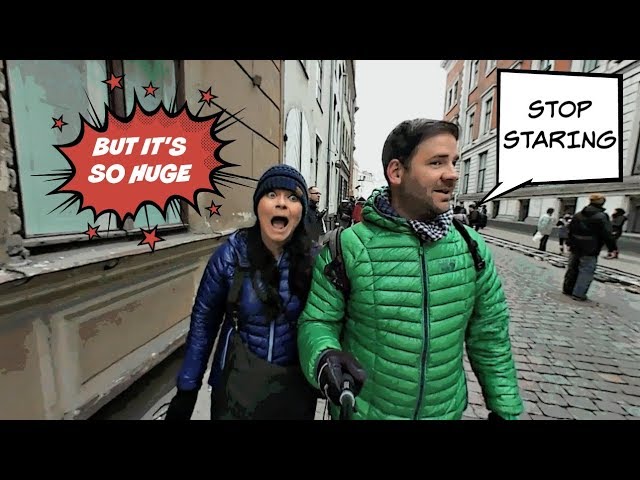 The Railway Bridge is the first iron railway bridge in Riga. It was completed in 1872 and constructed to allow the Riga–Jelgava Railway trains to cross over the Daugava River.

The crown glory of Riga is the House of Black Heads. This bright pink Gothic building shines in the sunlight and is the prettiest building in the city.

Originally erected in 1344, it was completely demolished by the Soviets in 1948. However, it was reconstructed in the late 1990s with the medieval saying replaced above the entrance that reads, “If I should fall, build me again.”

XL Pelmini, aka The Dumpling House, is probably the cheapest, local eat in the city. Moreover, the self-serve buffet-style dumpling bar offers chicken, pork, and vegetable-filled dumplings with a choice of toppings.

Of course, we chose sour cream as our topping. A bowl of dumplings costs around €2-3 each.

Not everyone enjoys cooking as we do, but we ate well in Riga right in our kitchen. We headed to Rimi Supermarket in the Galerija Centrs shopping mall

Rimi is a great grocery store and it offered us the opportunity to eat locally while still watching our budget. Sometimes travelers just need an idea of what to buy, so head to the deli section to try the following: Below are some general travel tips for exploring Riga:

We’re always looking for insider tips. Have we missed an attraction, great local restaurant, or hidden gem in our write-up? Feel free to add your helpful tips in the comments section below.