Home » Things to Do in Bitola | Macedonia’s Most European City Bitola was one of our favorite stops on our tour of Macedonia. It has a charming, small city vibe with shady parks and a cafe-lined Main Street. Of all of Macedonia’s cities, Bitola feels the most European with its romantic 19th century neo-classical architecture.

Known as The City of Consuls, it is home to twelve different consulates. Generally, they are housed in beautifully crafted buildings on the city’s main strip.

This Bitola, Macedonia travel guide and itinerary will share things to do, day-trip ideas, offer budget-savvy tips, and provide contact information for locals to help you plan your next holiday to this amazing city.

Part of the lure of exploring this city was the opportunity to go slowly through it. We people watched at a cafe, ate ice cream admiring the beautiful Russian Consulate, and drank cheap bottles of Tikveš wine at the local Irish pub. As a rule, we love exploring cities where there’s enough to keep you busy, yet opportunities to enjoy life at a slower pace.

After touring Lake Ohrid, we stayed in Bitola for three nights. We took a 2-hour bus from Ohrid to Bitola which cost about USD 7 per person. From the Bitola Bus Station, we were able to walk about 1 mile to our hotel.

We booked accommodations at the Theatre Apartments for about USD 30 night. It was a clean, comfortable place to stay with a kitchenette, washing machine, and a balcony. Also, the apartment is a short 5-10 minute walk from the city center.

Furthermore, the location offers a quaint, residential feel. This is appreciated since the city center can get quite rambunctious at night.

Best Things to Do in Bitola, Macedonia

Join us on a photo tour sharing some of the best sights around Bitola.

About one mile (2 km) from the city center, visitors can tour Heraclea. These ruins originate from the 4th century BC. Admission costs 100 dinars per person, or about USD 2. This ancient city is an amazing piece of preserved history.

For example, the highlights include five gorgeous tiled mosaics, an amphitheater, and a museum.  The stunning, mountain backdrop accents the experience.

Interesting Facts About the Heracela Ruins

Širok Sokak is the lifeblood of the city. There are many café bars along the pedestrian street running from City Park to Magnolia Square. Café Pajton, with its Parisian cafe vibes, is one of the best in the city.

In the summer, consider ordering a Nescafé, which is how the locals order an iced coffee. Those paying close attention to signage will see that the real name of the street is Marsal Tito. 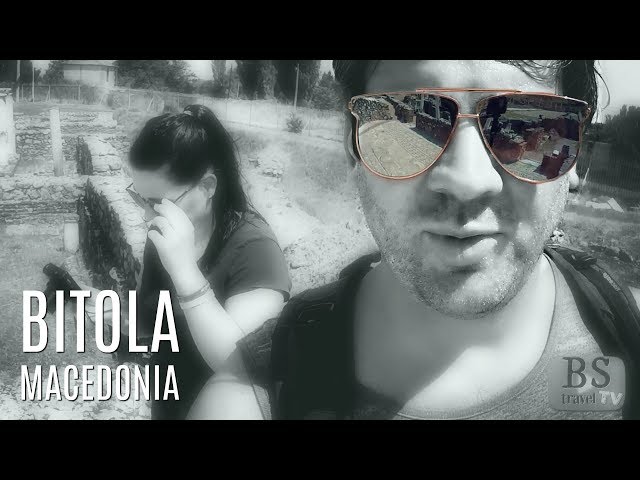 The clock tower’s beginnings are a highly-debated mystery. This is because it is unclear when the Bitola Clock was constructed. Some records speak of a clock tower in the city as early as 1664.

However, it is unlikely that this is the exact tower that still stands today. Some researchers suggest that the tower was constructed in 1830, at the same time as the nearby church of St. Demetrius.

Historians do know that 15 new bells (weighing 900 kg) were placed in the tower as a sign of gratitude for the construction of the Memorial Cemetery of German soldiers killed in the First World War.

There’s a hidden falcon located on the Bitola Tower, however, we couldn’t spot it.

In 1830, near the end of Ottoman occupation, the Church of Saint Demetrius was constructed.Under Turkish rule, the building of Christian churches was not permitted.

However, as the Turkish empire weakened, permission was granted to build churches to keep the population happy.

The builders were required to follow certain rules when constructing the church. For example, the exterior needed to be plain without ornate decorations. Also, the church had to be constructed one meter below ground so it wouldn’t dominate the city’s skyline.

Peek inside and you’ll discover that the interior is ornately beautiful with lavish woodwork. The church is featured in two movies—in the opening scenes of The Peacemaker and in Welcome to Sarajevo.

It’s a small zoo, near Heraclea,  featuring lions, a Siberian tiger, and bears. The cost for admission is 50 denars, or about $1 US dollar. Weekday admission is free for seniors, kids under 5, and those with special needs. Next, to the zoo, visitors will observe a Serbian Military Cemetery located on a nearby sloping hill.

8. Angel for the Defenders of Macedonia

Magnolia Square is Bitola’s main town square. Located near the Bitola Clock Tower, the square has a central fountain featuring the Vergina Sun fountain in the center. The Macedonian flag features the same Vergina Sun shape.

In the evenings, we enjoyed Pub Bourbon Street. The Irish pub appearance is quite deceiving. Apart from the typical bar food, they serve up local Macedonian cuisine too. One of the specialties is a melted cheese and mushroom pot served with a basket of warm sesame bread.

The melted cheese pot is a signature dish in Bitola. The pub offers liters of Tikveš wine, often served in the bottle, at a budget-friendly cost at around $4 US dollars.

If you’re looking to rent bikes to explore Bitola, our hotel offered a bicycle rental service. A full day rental cost 8 euros. It is expensive to rent two bikes for 16 euro. However, it is an option if you’d like to explore the city by bike. Do you have a reputable bike rental company to share in Bitola? Let us know and we’ll add it to this post.

Many travelers passing through Bitola visit Pelister National Park to enjoy the mountains and hike. Unfortunately, without a car or a local guide, this may be difficult. Our guide in Lake Ohrid passed along the contact information Jonce Murat, a professional hiking guide and expert in Pelister National Park. Pelister Guides is the name of Jonce’s company. He arranges guided tours of the park.